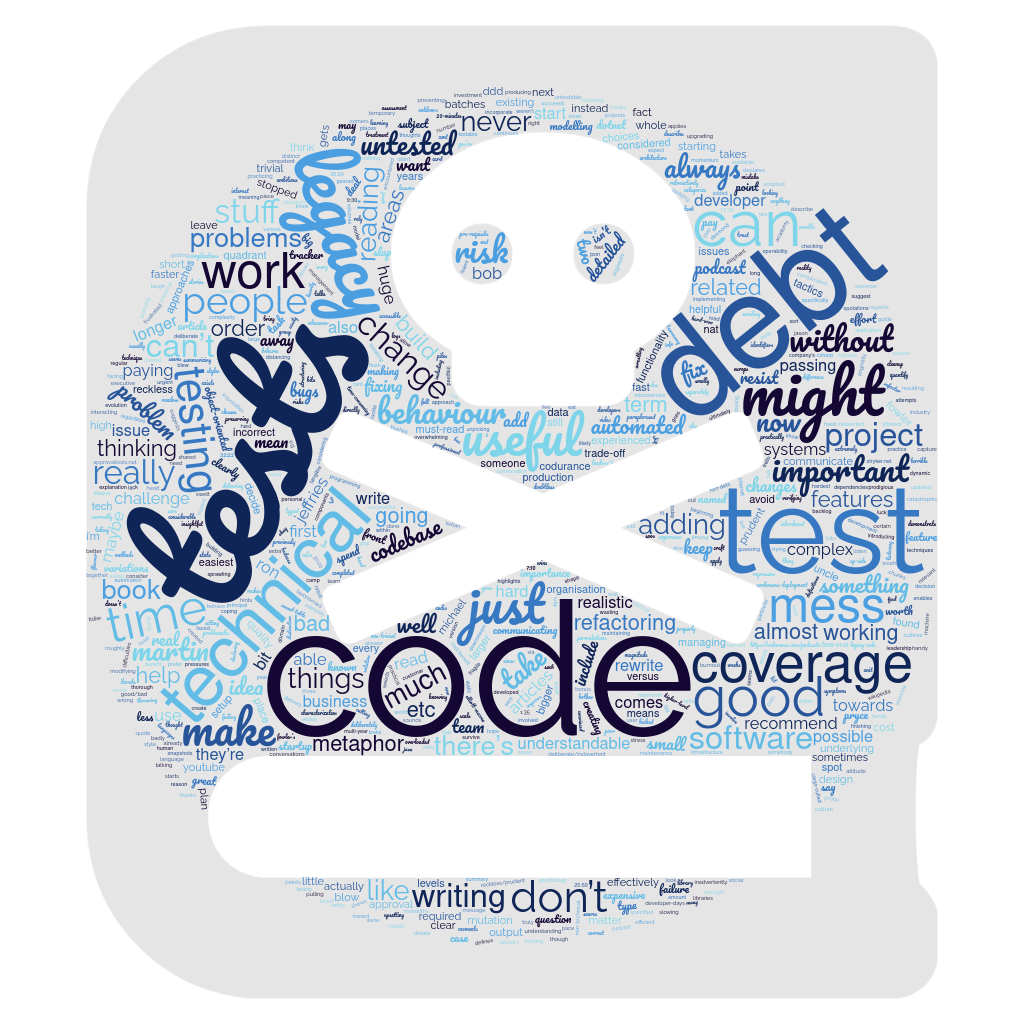 Sometimes a codebase has an overwhelming amount of “terrible” stuff that as a developer you almost can’t help but just diving in and fixing it. Doing this without thinking too hard can result in many variations of failure, such as:

⏩ If you want the executive summary, head over to my Leaders guide to technical debt - aka “why can’t we ship anything!?” 🧐. For the technical details read on below.

Here’s a couple of must-read articles on the subject:

“We take the next feature that we are asked to build, and instead of detouring around all the weeds and bushes, we take the time to clear a path through some of them.”

In short, don’t make debt cleanup its own task, just tackle what gets in your way as you go, and leave the camp tidier than you found it.

I recommend reading the whole article here: Refactoring – Not on the backlog! by Ron Jeffries, it’s not too long.

“Tech debt”: an overloaded term. There are at least 5 distinct things we mean [when] we say “technical debt”.

Read the full explanation of each type of debt here: Towards an understanding of technical debt by Kellan Elliott-McCrea, a bit longer but an important piece of writing.

If your project is sooo “bad” that you feel like throwing it out, you might do well to heed this quote:

“There is only one way to eat an elephant: a bite at a time.”

~ Desmond Tutu (via Psychology today of all places!)

Which to me means iterate your way to good.

It doesn’t mean have no plan, in fact you should know where you are trying to get to and how realistic that is so you don’t end up with a rewrite that can never be completed because it was too ambitious.

Is a mess a debt?

“A mess is not a technical debt. A mess is just a mess.”

A Mess is not a Technical Debt by Uncle Bob suggests that the use of the term debt is for a considered short term trade-off just like taking out a loan, but a mess is nothing of the sort as there is no up-side to creating a mess versus having a clean but temporary solution to a problem.

More taxonomy of bad code: the Reckless/Prudent vs Deliberate/Indavertent quadrant

Martin Fowler shows that you can categorize debt by whether it is reckless or prudent, and separately whether it was deliberately or inadvertently added to the code.

“The useful distinction isn’t between debt or non-debt, but between prudent and reckless debt … there’s also a difference between deliberate and inadvertent debt.”

“The decision of paying the interest versus paying down the principal still applies, so the metaphor is still helpful for this case.”

These are useful definitions that can help clearly communicate complex issues with the code to people not directly involved in the code.

It’s well worth reading much more of Martin Fowler’s writing. There’s so much to learn from Martin about programming good practice; the articles are all written in a very human and accessible style.

Now that TDD is widely adopted we’re faced with cleaning up the output of those who cargo-culted test coverage, or had well meaning but ultimately badly formed attempts at adding tests to their code, sometimes with prodigious volumes of test code.

I think “Legacy tests” is a useful term to describe these problematic tests. Nat Pryce outlines some useful hints that you have legacy tests on your hands:

“Symptoms of legacy tests I have encountered include:
…
Tests are named after issue identifiers in the company’s issue tracker.
Bonus points if the issue tracker no longer exists.”

The audio version from Codurance

Codurance hosted an insightful round-table podcast episode with a group of people who are clearly very experienced. You can listen here: https://codurance.com/podcasts/2019-01-21-legacy-code/ and will doubtless be inspired by some things in there. The conversation takes a little while to build momentum but it’s worth the wait.

Here some highlights of what I learnt from listening to the show:

“Preserving behaviour is a large challenge. When we need to make changes and preserve behaviour, it can involve considerable risk.”

This book is heavily geared towards unpicking the difficulties in getting untested code under test in object-oriented static typed languages such as Java, C# and C++, and modifying it safely.

It is a detailed and thorough treatment of all the tactics available to bring untested object-oriented code under test, specifically sprawling and smelly classes and methods. It won’t help you with larger scale problems such as poor structuring of microservice architecture, message bus systems etc.

This article summarizing the Feathers’ Legacy Code book has some of the tactics detailed and gives a good flavour of the book so you can decide whether to dive deeper.

Maybe modelling is the problem

Something that looks like bad code could be that way because of a failure to properly model the real world.

Domain Driven Design (DDD) has much to teach on the matter, and this is a great video on the why modelling could be the problem: Technical debt isn’t technical - Einar Høst - DDD Europe 2019 - YouTube

Podcast episode Software Delivery in Small Batches: Automated Testing with Jason Swett talks about practical approaches to legacy code, including the idea that you actually can’t always avoid writing some more untested code because of the cost-benefit trade-off.

The episode describes the evolution of our industry in learning the importance of test coverage for avoiding known risks in software development, and declares that you cannot truly call yourself a professional developer if you are not writing tests.

“I always recommend starting with the easiest most trivial stuff, adding some tests in those areas and then working up to the bigger areas”

Some relevant thoughts from the episode:

“It all comes down to managing risk”

The people on the episode are Ruby developers, but the lessons they talk of apply regardless of language.

(Some of the quotations above are paraphrased)

Thanks, now I’m even less sure what to do

Are you wrestling with something you don’t like in a codebase you have to deal with? I’m guessing that’s why you’re here. Or maybe someone sent you this along with a rant about the tech debt in the codebase you own.

Either way, I suggest slowing down a bit, sitting down together (while maintaining social distancing), and considering how all the things that bother you about the code in front of you fit in to the various taxonomies detailed above. Then use that assessment to make a calm and rational plan about roughly where you want to get to. Then decide on the one next thing you will do towards that. Use the Ron Jeffries approach to get you there without wasting time on things that don’t really matter.

Practically, that might mean if you have a user story, ticket or Trello card for a feature, it might take longer to do as you include the work to “pay down” some of that badness along the way, knowing that it will improve your overall velocity over time. Be wary of pulling out separate “debt” stories to do, though that can work if the team dynamic is right.

To keep your stress levels down make it a shared team problem, have a bit of a laugh about it, take regular breaks in the great outdoors, and support each other.

I’ll leave you with this little song I found on YouTube about bugs:

If you want to avoid the task at hand by reading the whole internet in the hope that it will help, start here: